The name is sort of low-hanging fruit, no?

I was asked to run an art project for my company’s corporate retreat (read: debauched psycho reunion, very fun). The idea was that it could be collaboratively done by a steady stream of distractible people, some who would like to contribute but not be tied down in case the bar opened.

I searched around for such a project and found a good one for “older primary children.” That roughly equals drunk adults. It’s worth it to mentioning the beautiful art it’s based on, Will and Caro.

But we needed a test first. So my roommate and I did some planning and dragged our idea to the park.

Above, Alice struggled with the supplies, and we set up the instructions for passersby. We were testing how hands off we could be. 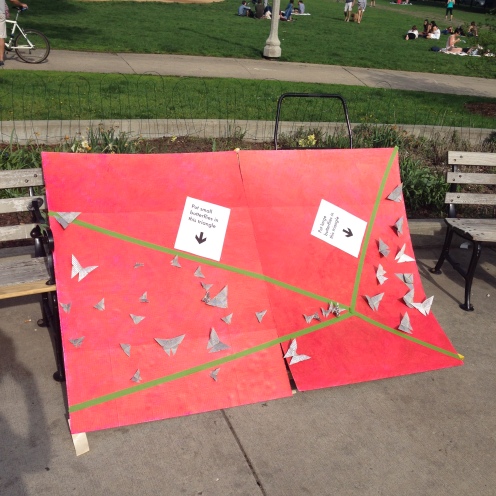 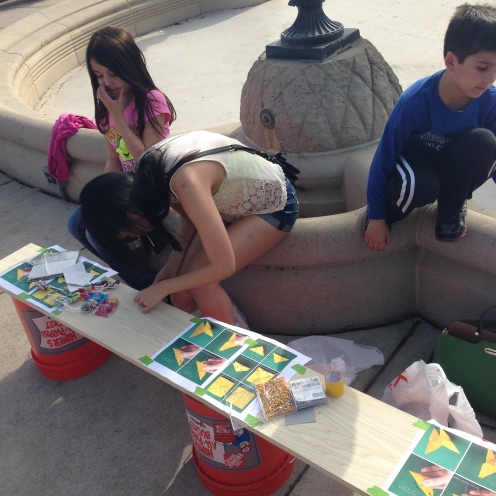 We set up a bench made of a pine board and Home Depot Buckets (a classic Madelyn Freed move). Some children are very good at origami! Some are very bad.

Mostly parents with children came by, as they were glad for the distraction. Everyone else thought we wanted money so avoided us at all cost. It became clear very quickly that people needed a lot of origami help, and then could place the butterflies on their own.

There wasn’t enough time to finish the test, but it was everything I needed to know. I was ready to do my favorite thing–painting huge canvases in a hotel room. 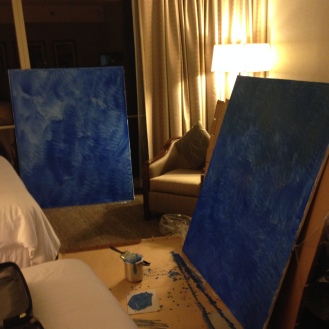 I was up all night making a huge, contained mess. I was in bliss. 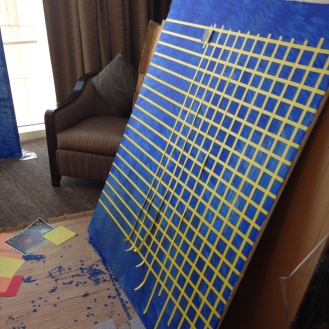 I carefully taped the grid where the butterflies would be, then did some photoshoppery to decompose the final image into colored pixels. 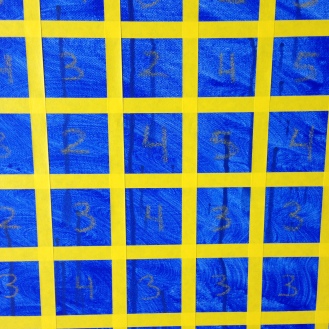 I had a final pixel image that I mapped out, and labeled each cell with it’s corresponding color.

I had help from volunteers, told them what to do, and then just left to drink and hang out with my business crush.

They were doing great! Nearly done, and perfectly timed. 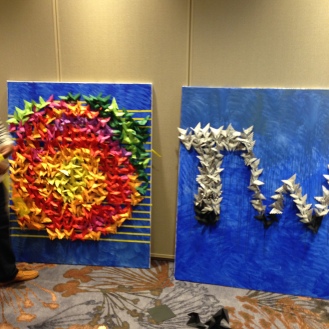 Me and a committed friend finished up the logo right before I had to run to the airport, but the final product looks very nearly like the peach it’s supposed to be!

It worked! Everyone who participated felt like they had done something significant, even if they only made one butterfly. And now it’s hanging up in Atlanta, looking fresh.